This past week, I occupied myself with a few tasks, major and minor. A number of these changes relate to the game’s presentation, player interaction with the world, and the game’s feel.

Just Another Brick in the Wall

For a while now, I have been using a texture that defines the border of a brick, and attempts to simulate a bevel. Without it, the wall appears as a solid grey stone surface. The texture would stretch out over each brick face indiscriminate of the brick’s size. As such, 1×1 bricks and 8×8 bricks both had their front faces largely defined by the same image, the latter with noticeable stretching. To fix this, I created a large texture atlas with 8 permutations of the texture, each of a different size. When a brick is created, it is given the coordinates of the correctly sized version of the texture. Here are the results: 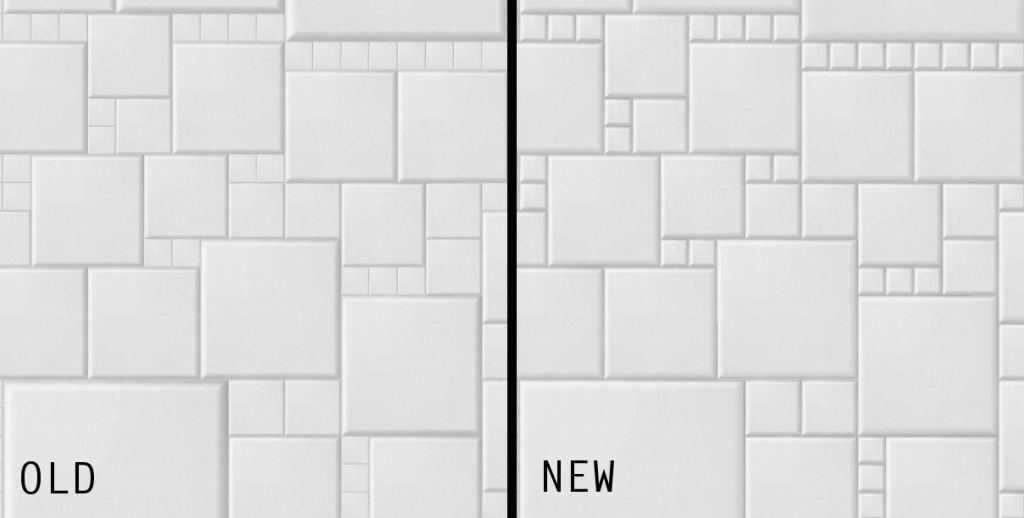 As you can see, the older brick texture is stretched out over each of the bricks. It’s a huge improvement, artistically (looks more clean and professional). The sides of the extended bricks will also need to be included on the texture atlas, since stretching is still visible there. I will be experimenting with adding some slight discoloration to each brick to add some variation. I will also experiment with adding random cracks and imperfections to the bricks.

I did a major overhaul of the system that governs picking things up and putting them back down. It’s smoother, feels better, and much more stable than the earlier implementation. This system accounts for all player interactions with the environment that are unrelated to brick movement, so  it was important that I square this one away.

Also, the wand is no longer fixed in place in front of the player… or rather, it is, but it does not feel that way. It rotates a bit in response to player movement, complementing the wand’s movement bobbing. The player turns left and it takes a little time to rotate back into position.  In other terms, before it felt like a Doom gun, now it’s more like the device from Portal.

Before, weather was static depending on your current biome. Rain, snow, fog, etc. each effectively had their own biome. Well, I now have a more dynamic system that randomizes the weather every X minutes, based on the “climate” attached to the current biome. Should be a nice atmospheric touch. Now I am debating whether adding a day/night cycle is worth it. Could make things that much more interesting if the world is always changing around you.

I did some content work on a city. I had an idea for a simple one-shot puzzle mechanic that I think will be fun. That’s all I’ll say about that.

I am going to Steam’s Dev Days in Seattle tomorrow. It will be a welcome break from NYC, and there will be a number of interesting panels there. I want to get my hands on one of those Steam controllers to see what the deal is with them. I’ll do a post next week on what I’ve learned there.

Also, Spelunky’s has gotten its claws in me with the daily challenge.

One thought on “Building a Better Wall”