Today, I founded a new game company called Cartwheel Games. Perhaps someday I will be able to justify the ‘s’ at the end of my company’s name, but for now, Against the Wall is the only title being developed. I spent the day setting up a new (rather empty) website, YouTube channel, Facebook page, getting the legal stuff squared away, and writing a blog post.

This has been a long time in the making. I came up with the name early last year, but never saw an imminent need to actually register a business. I also redesigned he logo dozens of times before I settled on the current version. I’m rather proud of it. I suppose that the next step is to write a provisional mission statement. How about this:

The mission of Cartwheel Games is to create and maintain whatever games Michael Consoli feels like making. Quality.

In the process of setting up the company, I’ve been trying to separate my personal and business online identities with mixed success. YouTube doesn’t allow channel changes or transfers, so I’m just going to leave the old consolim1 channel as it is, and will only post to CartwheelGames in the future. If you subscribed to the former, I suppose you should switch over to the new channel.

What I’m (not) Playing

Steam claimed thirty of my dollars on the last day of the Summer sale. I have yet to play any of these games, but the list is: Machinarium, Q.U.B.E., The Swapper, and The 39 Steps. I figured that puzzle platformers and adventure games could serve as research for Against the Wall. I turned down Don’t Starve, since I actually want to work in August. Oh, and I’ve been trying to get my hands on a copy of Catherine. At one point people were drawing parallels between Against the Wall and this fast-paced third-person puzzler/dating sim. Go figure. Though I should play it for reference, regardless.

Oh, and Virtue’s Last Reward consumed a weekend, in the same manner that its predecessor 999 did in June. Contact me if you’ve played either game. I really want to get into a discussion about all of the crazy stuff this series has churned out.

This week has been a weird one so far. The passing of Giant Bomb’s Ryan Davis hit me pretty hard. I’ve listened to his voice everyday for five years in podcasts and videos. I really admired the guy, his opinions, his wit, and the depth of his pop culture knowledge. The man had a deep fear of heights, so I was looking forward to his reaction to my game. My thoughts go out to his wife, his family, and his many friends.

I needed to get my mind off of things the last three days, so I opted to dip back into coding, which requires more concentration, rather than advance the art. I created two new things that gives me some flexibility with level creation. Namely, Dynamic Super Props and Prop Containers.

Props in Against the Wall come in six flavors:
Static: Immobile permanent objects, they are not saved in the player’s game file. e.g. houses, the windmill.
Dynamic: Mobile props that don’t respond to physical forces (kinematic). They can transition between chunks and be saved in the new chunk. e.g. Elevators.
Entity: Limited-mobility props that the player can interact with and change the state of. e.g. levers, buttons.
Dynamic Entity: Mobile props that are physics-enabled (rigidbody). E.g. the scarecrow, anything that can be picked up.
Super: Immobile props that are very large. These props are not saved with chunks, but rather are saved and loaded from files representing large areas called super chunks. If something needs to be seen from very far away, the prop is marked as super. e.g. cities.
Dynamic Super: This is the new category of prop. These props are for anything that can be seen from far away and may have multiple state changes or movement. e.g. trains, rising bridges, large platforms.

The other innovation is a special sub-class of prop called a Prop Container. These props are capable of generating and managing other props. If I want to have a train, the container can spawn the cars, the seats, controls, etc. All containers themselves are either dynamic props or dynamic super props, since they are meant to move around. All that’s left is the bug testing for these features, then I’ll return to the art.

I’ve been co-working with friends frequently, going to this cafe or that, being as productive as possible. I should mention that I participated in Molyjam last weekend, and made a small puzzle game with my friend Atlas.

One more thing, I made a few models for what may be a “facility” or “factory” tileset. Not in love with the design, so there will be a few more iterations on the sketches. That’s it for now.

I’ve managed to get the Outpost models into a presentable state, inside and out. Rather than use multiple textures on each mesh, I am using vertex colors to add red coloration to the building components. 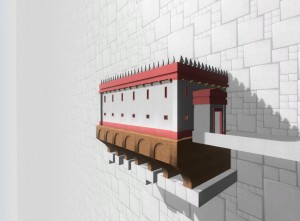 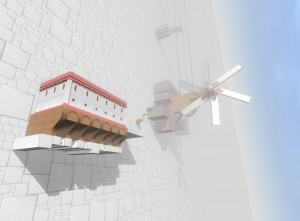 I also recreated all of the generic material textures for the game (wood, metal, etc.) to be a bit more flat and fitting with the minimalistic aesthetic. Excluding furniture, the outpost is complete. Tomorrow’s task is to start work on a heavy industry building set.

I’ve submitted the latest version to IndieCade, here’s hoping that the game becomes a finalist. I’ve fixed a boatload of bugs over the past couple of days, mostly centered on the elevators and checkpoints. Here are a few bug fixes that may help you if you are a dev:

I’ve fixed this one audio bug that was annoying me for a long time. Apparently there is a bug in Unity’s audio system that causes popping or scratching sounds when 3D audio is played or stopped. Setting the doppler variable to 0 averts the problem entirely.

In general, when modeling  a modular set, make sure that the objects in the set overlap each other by a very tiny amount when positioned next to each other. That is, if you have a wall mesh that is meant to occupy a space of 4 x 4 x 0.5, it would pay to extend it to 4.0001 x 4.0001 x 0.5001. Why? Due to floating point imprecision, there will be a very tiny gap in between meshes that line up exactly next to each other. You will see ugly seams everywhere unless you make minuscule overlaps between objects. The overlaps are not readily visible, but the seams that they prevent  are highly noticeable.

The game’s Greenlight rank is now at 98% of the way to the top 100. It’s been around this level since mid-January, feels like being caught in limbo. Then again, I haven’t exactly been on top of marketing the game.

What I’ve Been Playing

I played through Nine Nine Nine over the weekend. This game hooked me pretty bad, I couldn’t stop playing until I saw every ending. The story was engaging and surreal, the puzzles difficult but fair, and the characters subvert the archetypes that they seem to embody. I was able to figure out who the mastermind was early on, but the game still had plenty of other unexpected twists and turns. Can’t wait to pay the sequel.

There’s another visual novel called Save the Date that you should check out. It’s difficult to describe it without ruining the experience, but it scratched a few of the same itches that Nine Nine Nine did, only in a much shorter game.