On Friday, I had second go at the models for the outpost. I divided each mesh into submeshes, so that there can be multiple materials applied to various parts of an object (in this case, wood and stone). In the pictures below, I’m just using some generic stone and wood textures, and will replace these with brick, tile, carved wood textures in the near future.

Here are shots of the outpost in-engine: 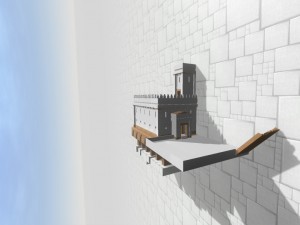 In the first image,  you can see the outpost’s gatehouse and a balcony to one side. The balcony has a broken staircase on the right that points towards the windmill building.

The second shot is of the new interior models for the outpost. There’s a door, some room partitions, staircases leading to a second story, etc. I should note that I split all of the 2-story wall sections in half, so that I can mix and match windows, entryways, and flat walls. Also, I can make buildings of any height by stacking these wall segments on top of each other.

Next step is to add the final textures and script the opening sequence.

My site was slow for a while now, but I took some time yesterday to root out the problem. It was taking 10 seconds to load, and not indicating that messages were submitted in the contact form. Also, I disabled the forum. I’ll re-enable it when I release something new for when people need to submit bugs and such.  Bbpress forum software is severely lacking in features, and it’s near impossible  to export data out of. It’s a real bummer to use, but eh, it works with WordPress.

I’ve been co-working with a few of my New York indie developer buddies Itay and Joe. I’m much more productive when I have other people in the same room as me to work out problems with, even if hey are on their own projects. Can’t believe I didn’t try this before. Also, it gets me out of this apartment from time to time.

Just bought Kairo on Steam, and It’s right up my ally. Blocky minimalist art, smart puzzles, and monolithic stone structures? Count me in.

Yesterday, I spent the day working in a coffee shop in Brooklyn, whipping up some meshes. These meshes are part of a modular set that can be pieced together into buildings (walls, roofs, columns, etc.). For the demo that I’m submitting to festivals, I plan on starting the player in a building that uses this set. For now, I’m calling these assets the “outpost” set, since this initial building is rather remote from civilization.

In the first image below, you can see my inital 3D sketch, a few grey boxes lumped together with some indication of a doorway. I was originally planning a three-level shanty. The middle building is my second attempt at a sketch. At this point, I had decided to make the building look more like a tower or castle, with arrow slots, two-story-tall walls, and thick entablatures. I then set about using this sketch as the basis for the modular components. I took these components, which are arranged in the second picture, and assembled them into the building in the top picture on the right. I also decided to add kite-shaped crenels to the set, just to make it look cool.

Keep in mind that this is a very rough first pass at a mesh set. As stated in my last post, I will just do a box unwrap on these meshes and assign them multiple textures each. This is not the most efficient way of modeling/texturing, since it increases draw calls. The alternative is to use texture atlases, which I really, really hate generating and takes up a ton of time. Also, creating buildings out of small modular components can potentially slow the load times for the particular chunk that they are located in, since there are more objects in a location. On the plus side, the modular set means that I can easily create buildings of many shapes and sizes.

I haven’t decided the color set just yet, but I am leaning towards white walls and red detailing. The whole thing looks more like a mini palace than a military outpost, so I may be adding some components such as wooden scaffolds, cranes, and lookout turrets to make it a bit more utilitarian. The whole game will feature rather blocky and minimalistic structures like this one, keeping with the stark aesthetic of the world while also operating within my capabilities as a modeler. The next step will be to create the interiors, doors, platforms, support brackets, details, and materials.

Hey everyone! I’ve been working towards an IndieCade submission for Against the Wall, trying to at least get a “starting area” in the game and a few more settlements. I’ve mentioned this before, but texturing has always been my biggest weakness. Blender is a bit convoluted when baking a bunch of textures into an atlas, but it’s a free tool and what I can afford. As such, I’ve taken a cue from Morrowind and other TES games and am just doing a general cube unwrap and slapping on flat textures (wood, stone, etc.). It fits with the minimalist art aesthetic, and cuts down on production time for assets.

My major challenge right now is level design. It’s very difficult to craft vertically-aligned levels that have a good flow to them. I’m thinking that some HL2 or Minecraft-style ladders may be in order. The problem with such ladders is the whole planting your face right up against a texture, and they are not very fun to use… but it may be worth an experiment. Also, I was avoiding including building interiors, but it has become apparent that I cannot just have people crawling around the outside of buildings. Sure, most structures will be locked or in some way obstructed from entry, just part of the scenery, but I do need some contraptions housed in enclosed spaces.

I’ve spent the last couple of days coding some interactive environmental elements, just creatures and objects that provide additional challenges, or contribute to the sense that this is a living, breathing world.

I’ve been doing research into recently released exploration games, looking for inspiration. Since the semester ended, I’ve played Miasmata, Antichamber, and Starseed Pilgrim. Played through most of the Myst series as well. Mostly, I was looking for how each game handles second-to-second action, and how the game world is revealed.

I was toying with the idea of removing quick-saves in favor of checkpoints based around beds and such. However, I realized that this would limit the space that players could explore, if they want to wander deep into the wilderness, for instance. Also, the game is challenging as it is, what with the constant threat of falling and losing progress. Though I would like to avert save scumming, I also don’t want it to be unnecessarily brutal.

A few other notes: each rest area/checkpoint should feel like home, a refuge from the perils of climbing the wall. These areas are not quite hideouts, the player has no inventory and there is no bed mechanic, etc. but I do want to make specific areas that the player would feel like living out of. This was one of my favorite things to do in Morrowind and Minecraft, just setting up camp and exploring an area.

What I’ve Been Playing

I’ve played through Uru: The Complete Chronicle. As a decade-old game, Uru game has no business being this gorgeous. I was really able to immerse myself in these little worlds for a time. CYAN seems to have a thing against repeating artwork, nearly all models in the game are individually crafted and appear once. Oh, and the sound design is impeccable. Some of the puzzles leave a lot to be desired, especially since many were originally intended for multiple players to solve. Still, I liked the ages in this game, a number of the puzzles were entertaining, and the atmosphere was spot-on.

I finally got around to finishing Antichamber. Now that’s an amazingly designed videogame. It left me feeling like a champ, the puzzles were difficult but not so obtuse that I ever needed to consult a FAQ. Like Starseed Pilgrim, half the fun was in exploring the mechanics through experimentation. It never explains anything, outside of fortune cookie-like hints on panels scattered throughout the world. Also, the mechanics do not overstay their welcome, each new mechanic receiving only a handful of puzzles before a new paradigm is introduced. I must confess that I’m a completionist, so I couldn’t put the game down until I unlocked all the secrets and filled out the game’s map. As a first person puzzle-platformer made by a single guy, I had to check this one out to get a sense of the progression, feel, and story.

Then, there is Miasmata. The game is just pure exploration and filling out a map: a cartography-based game where you play as a plague-ridden man abandoned on a lost island and hunted by a strange hybrid monster. Again, as a completionist who loves games about being isolated and lost, this one got its hooks into me. Very impressed that it was made from the ground up by two people.