No Such Thing as a Break

My semester at the NYU Game Center is moving at an unrelenting pace, halting briefly after last week’s midterms. Currently I have seven game projects in the works, including Against the Wall. To summarize what I’m doing at the moment: two CCGs, a digital version of one of them, a minimalist computer game, a top-down space shooter, and a video game design doc/pitch. There’s also this one semester-long project for a class called Human Computer Interaction that is somewhat related. Basically I’m juggling a ton of things at once. I’m technically on Spring Break right now, though really I’m just using the time get as much done on Against the Wall as possible.

So far, this work has constituted remaking a location that I refer to with the non-descriptive moniker “Station 4b”, a settlement located in a forest. The earlier versions left a lot to be desired in terms of level design. Now it has a much simpler and straightforward path to take. Here’s a post that I did on the first draft. The overarching theme of this location is that it is something of a “cage.” Here are some pics from my first pass at the new version: 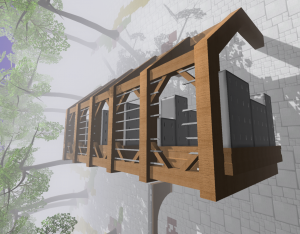 Also, I redid how props are loaded to prevent a bug that partially broke chunk generation.

I should have mentioned this after IndieCade East, but I was able to try on the Oculus Rift. It was very interesting, but I’m still highlt skeptical. It gives you a wonderful sense of your position in the world and the space that your virtual body occupies, which would be absolutely perfect for games like mine. Really, I’ve never had such a severe case of vertigo playing a game as when I leapt off the side of Rift’s demo world (for science). I am curious as to how they solve the aiming problem. That is, in FPS games, you aim by centering the camera on a target. I wonder what it would be like to aim with a tool that tracks head movement. Would the player just stare in the direction of a target and pull the trigger? Would the player have to keep their head perfectly still to make a precise shot? Would the gun aiming still be controlled by a thumbstick on a controller? TrackIR has support for several first-person games, but this kind of head tracking technology seems better suited for games that take place in a cockpit, like a flight sim or driving game.

Also there are apparently latency issues, which was one of the possible reasons that DOOM 3 is no longer shipping with the dev kits (could also be disagreement with the publisher or something). Naturally, I’m going to get my hands on a kit and test it like crazy. If nothing else, players would be able to put on the Rift and take a dive, if I manage to get some implementation going.

Oh yes, and IndieCade East was fun. I was a volunteer “docent”, badge-checker, and at one point a coat room attendant. I ran around a bit, showed off the game, and spoke to a bunch of other indie devs.

Next week will be all GDC all the time for me. I bought one of those Summits and Tutorials passes that lets me into things such as the Independent Games summit, but not into the main conference lectures. The main and all access passes were too expensive for me to consider, and I am really just interested in the indie stuff anyway, and meeting with other indie devs. I’ll be going to parties and hanging out at the IGF area for a while, and that’s pretty much it. Closest thing to a vacation that I’ve had in a while. Shout-out to my friend Itay for getting his game Mushroom 11 into  the Experimental Gameplay Workshop!

The week I get back is when many of my projects are due (or at least new versions). Here’s to hoping that I clear some of these things out of the way. Check my blog for one of the projects that I worked on this semester.

One thought on “Spring Break Crunch, Oculus Rift, and GDC”