I’ve just put up a page on Steam Greenlight. Hopefully Against the Wall will get enough votes to be considered for the service. It has long been my dream to distribute the game through Steam, at the very least. This campaign would help make this a reality. Please visit the page and give the game a thumbs-up!

On the progress front, I’ve redone the models for the basic city set to something more visually appealing while still minimalistic  I discovered that I can fake ambient occlusion by making full use of vertex colors on the models. By painting certain vertices semitransparent black, I am able to give more definition to the form of the structures and reduce the flatness of the textures. Light now appears to hit these models unevenly, as in real life. Normally, you would use image effects or bake ambient occlusion into texture atlases. My solution is cheaper performance-wise, and looks pretty cool. I also use it to color the insides of windows black, rather than use a separate black texture for the windows. This particular problem was nagging at me for a while, so I’m glad to have found a way around it.

The game is functionally well along, and my focus now has been level design and creating art for the new cities. After that, set piece coding will be my main goal. Also, while I do like a the current emergent narrative of the game, I have planned a few story elements that will flesh out the world a bit and provide some context for how life on The Wall works.

Let me know if you have any questions or comments, and be sure to vote! 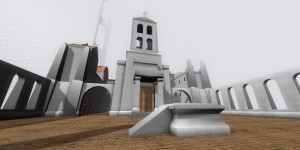 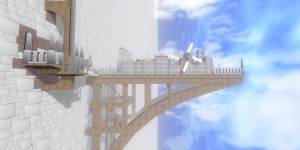 3 thoughts on “Greenlight, Fake AO, and the Game Plan”