The Lead-up to PAX East

A lot has happened in the past week Today, For instance, I got into the NYU Game Center’s MA program for game design! Need to go and accept their offer now.

Last Thursday, Against the Wall was featured at a party at Kickstarter HQ last Thursday. The game was projected onto a large screen for random people to play. Met a lot of interesting folks there. Good networking, fun party, and got some good insight into how people play and react to my game.

On Friday, I moved into a new home office. I live with my parents while I lack any real income. My sister moved out of the basement recently, and I’ve taken over the finished basement for work. Here are some shots of my new setup: 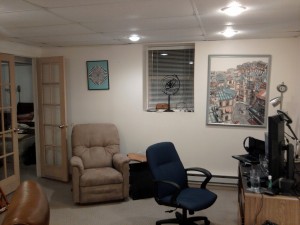 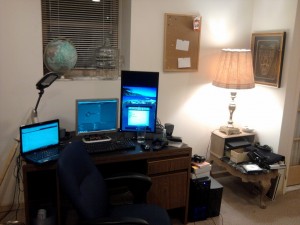 I used to live down here some years back. Good to be back in my old space. You can see my main desktop and laptop in the pics. Have a few very old computers lying around too. The tall right-hand monitor is used for scripting and such, and I also run previews of the game there. The left monitor is my usual desktop. Random stuff lying around as well, but decidedly not messy. Not yet, anyway.

I’ve also been researching posters and banners for PAX East. I have some table space, so I want to have at least one decoration besides business cards and such. I’ve designed a poster and will pick it up later today. I’ll be using an old artists easel to prop the poster up on the table. I’ve also bought some cool Sony heaphones: ZX-100. They’ll be handy for sound design tasks, and I may bring them to the expo for people to listen to the game on.

Still polishing AtW, reducing floating point errors in the wand and in the world and such. Less jitteriness all around thanks to some crazy workarounds. The wand has been modified yet again. This time changes follow concept work by Chris Pivot, a fan. The wand (pictured up top) is now shorter, and the main joint is more pipe-like. It’s also made out of a slightly glossy metal. I’ll give the shaft a rustic wood texture in the near future Thanks for the inspiration Chris!

Just a note: regular gamepad functionality has stopped working for some reason, and even XInput does not work in Windows builds. I am not sure, but it may be related to the 3.5 update of Unity. Guess I’ll only have a keyboard and mouse at PAX. There’s also this bug that swaps red and blue vertex colors when some meshes are combined. It’s a real pain, especially since the workaround is a performance-expensive hack.

Finally, I’m bringing by buddy Phil along to the expo. He’ll be sure to have more fun while I spend my days talking to folks in the Kickstarter Arcade. Stop by and say hi if you’re going to be there!

2 thoughts on “The Lead-up to PAX East”