Here is a picture of the staff’s new model. It still uses a placeholder texture, but the model itself has detail all around. I have little intention of having magic particles emanate from the staff, but rather wish to have a mechanical movement signify that the staff has been fired. The game Antichamber has a similar hoop staff device, only futuristic and certainly not made of wood. It used a very simple turning animation to indicate that the device has been fired. I could use something like that. An alternative is to give the headpiece moving locks or arms that open and close as it is used. The new design for the staff is based on the shinai bamboo sword of the martial art Kendo. I own a shinai, though I should say that using it as a reference model has been the only use I’ve made of it.

I’ve also added a new sky dome to the world. The dome has its own moving clouds that can be seen in the far distance. There is also a gradient progression between the horizon and the center of the sky. The gradient currently shifts between a steel-blue on the horizon and a dark blue in the center of the sky. The result is a bit of a blurring between the sky and The Wall. The best part about this gradient is that it can be adjusted on the fly to any other set of colors. If I wished to shift the weather or switch to another time of day, this sky dome can handle it. The shader for the sky dome comes from Pixelstudio’s Sky Dome.

This change was brought about by the game Dear Esther, which also  uses two moving planes and a static dome for a skybox. That game is lamentably short, I should say. I finished it in little over an hour and wanted more. Still, the art is very impressive. Mostly high-res textures, use of billboard plants, and most of all, colored lighting. The sound effects and well placed music triggers are also key to the experience. I can learn a lot from that game from a storytelling perspective as well, though mostly through the non-verbal aspects of the plot (no narration for Against the Wall). 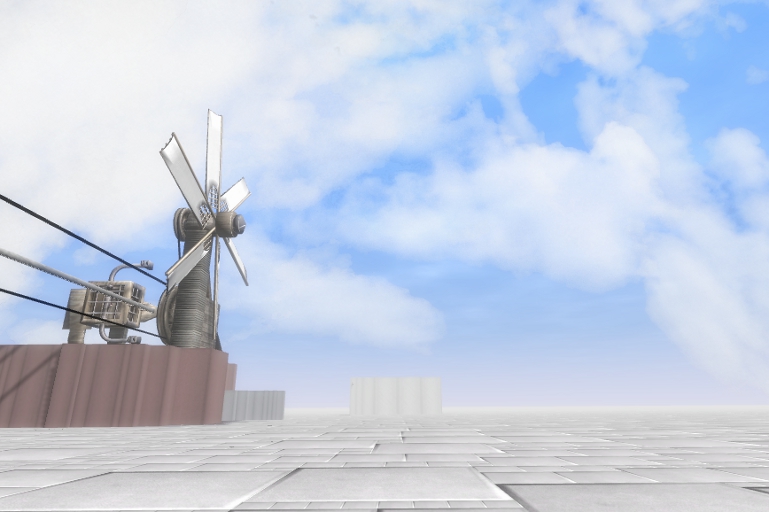