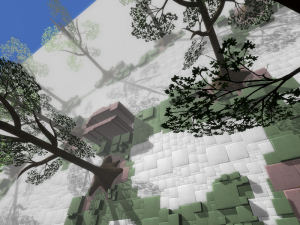 Yesterday I migrated the site’s forum to the to a new system. I also gave premium memberships to everyone who backed the project on Kickstarter. Barring anything unforeseen, I should be done with web development for now. I’ll have to get back to the game starting tomorrow and continuing on Monday. So, let me know if there is anything missing in terms of the new forum and membership system. I’m only one person and cannot test everything.

For the weekend, I’ll be participating in the Ludum Dare #22. This is a competition to create a full game from scratch within 48 hours, solo. Against the Wall started out as a part of the Ludum Dare #20 back in May. For LD #21, I created another project called Under a Watchful Eye. I cannibalized some art assets and scripts for Against the Wall from this project. I did the same for another project from September. This weekend, I hope to create a game that includes features that can be easily ported over to my primary project. Hopefully I’ll have something good to show from the LD on Sunday night.

EDIT: I’ve produced a game called Abandon. I’ve learned a lot from this experience, and will be incorporating a few concepts from my project into Against the Wall. Namely, large-scale architecture based on real-world buildings.