Warning, this may be a bit of a spoiler for people who want to be surprised by what is in the game. Just a heads-up.

Yesterday I took another pass at modeling a city that will be located at the 5th checkpoint of the game. I found my first pass at the city to be lackluster. It was rather flat, consisting of a vaulted area held up by three giant columns. The structure did not make much sense within the logic of the game world, but the real problem was this: it was ugly and not fun to wander around in. I finally decided to scrap it and produced the pictured models. I don’t usually show off work that is in-production, but I am particularly proud of what I made here. Note that there are no textures on the buildings yet.

Believe me, it’s bigger than it looks. This is just a 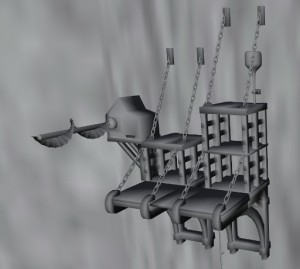 superstructure, it will have other smaller buildings housed on its platforms with the village in the alpha release. The city consists of two piers that are each the size of the village. The city is held in place by chains and is bolted to the wall in certain spots. Three cages-like structures will hold the city’s districts, and a monorail system runs through the middle gap. That giant corkscrew-like thing on the left is a horizontal-axis wind turbine.

My next task is to give some color to the whole thing. I’m not fond of texturing. I find unwrapping and assigning materials to a model to be a pain, and its an area where I lack real experience. Since I plan on eventually hiring an artist, the most reasonable solution would be to add placeholder textures and move on to designing the level itself.